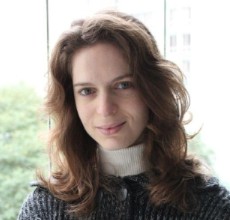 Please describe yourself in one sentence.

I believe I am an inquiring person, one that genuinely rejoices and fulfills herself in encounters with other cultures and other ways of being in the world. I am a hunter of new selves!

What is the essence of your current research?

My current research revolves around reconstructing and confronting different accounts of the underlying values justifying freedom of speech rights in the United States.

What drives your academic pursuit?

My desire to contribute to the strengthening of a structured and serious legal academic debate on civil rights, especially on freedom of speech rights, in Brazil. I think that sometimes, in Brazil, civil rights are treated as “cheap merchandise,” as goods that can be easily given up and whose violation can also be easily justified in the name of some common purpose or public order.

What impact do you hope to make on society one day?

I hope to enrich the academic debate in Brazil on the philosophical justifications of fundamental rights not only by the presentation and publication of my ideas but also, and very importantly, by the production of innovative teaching material and application of innovative methodologies for the discussion of fundamental rights in law courses. I think that the protection of civil rights depends in part on a legal culture of appreciation and understanding of the reasons for protecting these rights.

I also intend to work in the communication of academic results and in the framing of legal arguments to civil society organizations engaged in political debates on civil rights regulation - especially freedom of speech regulation - in Brazil.

I think there are important differences: in the U.S., although there is significant dispute about the limits of freedom of speech in certain domains, I perceive that free speech rights are widely and firmly consolidated in the sphere of political criticism, as well as in the social critique domain through humor and politically incorrect speech. In Brazil, there is greater uncertainty about the limits of freedom of expression because notions such as offensive, humiliating or discriminatory speech play an important and hazy role in legally restricting speech.

You were a practicing lawyer before returning to academia. Why the change?

I had a great desire to further educate myself on the logic of a debate about the reasons why we have, sustain and justify the institutional arrangements in which and with which we live. I did not have much access to this kind of thinking during the regular law course, but I thought there must be a way to discuss rationally about these institutional choices. So I chose to return to academia. I think I got it right!

It may seem nerdy, but one of the most exciting things I’ve done in New Haven was attending the debate between Professor Owen Fiss and Professor Harold Hongju Koh about Professor Fiss’ new book, A War Like No Other: The Constitution in a Time of Terror. It was extremely inspiring to witness the frank and respectful confrontation of two conflicting positions about the moral justification of American counter-terrorism policies. It was a lesson on how to take civil rights seriously.