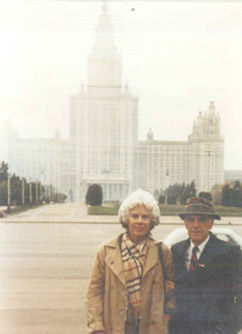 The Fox International Fellowship was established in 1988 by Mr. Joseph Carrère Fox (Yale Class of 1938) as a way to provide a peaceful intellectual exchange between Yale University and Moscow State University in the midst of the tense international environment of the Cold War. It bears the name of Mr. Fox and his wife, Alison Barbour Fox, whose vision and generosity has allowed it to flourish and grow under the aegis of the Betty and Whitney MacMillan Center for International and Area Studies at Yale (formerly YCIAS). Even before globalization became a household word, Mr. Fox, a philanthropist and former international investment banker, believed that education and scholarly interaction across the globe could foster a more peaceful and prosperous world order. Following the end of the Cold War and the easing of U.S./Soviet tensions, the program expanded to other partner universities, facilitating a still broader international conversation. Today the Fellowship has twenty exchange partners worldwide and over five hundred alumni network.

In the course of its quarter century, the Fox International Fellowship has created an extensive alumni community. Initially selected because of their leadership potential and desire to engage in intellectual discourse, former Fox Fellows now work for universities, governments, nonprofit organizations, and companies around the world. In recent years, there have been two well-attended reunions ––at Cambridge University in 2007 and at Sciences Po’ (Paris) in 2012–– that are a testament to the quality of the Fellowship experience.

Benjamin Zucker, a member of the Yale College class of ’62, designated a portion of his gifts to Yale to support environmental studies as a field of research in the Fox International Fellowship. The Fellows supported by his gifts are known as Fox-Zucker Fellows and focus on environmental studies. Fox-Zucker Fellows follow the same program as their cohort: they are talented individuals who will be future leaders in their respective fields and who, by virtue of those leadership positions, will contribute to decisions affecting global policies and international relations. Fox-Zucker Fellows are unique in that they focus on understanding and promoting environmental stewardship within an increasingly globalized world that must embrace multi-level governance in both public and private spheres. This global imperative benefits from the shared support of Benjamin Zucker and Joseph Fox underpinning this portion of this unique exchange partnership between some of the world’s leading universities.

The Fox International Fellowship has been supported by the Morse Charitable Trust since 2007. The Trust is named for Elizabeth Morse Genius, the first child and only daughter of Charles Hosmer Morse, who inherited great wealth and a profound family tradition of industry and philanthropy. Through a program and grants and gifts, the Morse Charitable Trusts seeks to ‘promote world peace and understanding through the improvement of national and international means of travel by air, rail, and sea. Fox-Morse Fellows follow the same program as their cohort: they are talented individuals who will be future leaders in their respective fields and who, by virtue of those leadership positions, will contribute to decisions affecting global policies and international relations.

The Max Kade Foundation supported the Fox International Fellowship for eight years, from 2001 to 2009. The Foundation sponsors programs that encourage the exchange of academic ideas among universities in the United States and German speaking countries. Fox Max Kade Fellows followed the same program as their cohort, focusing on understanding and promoting topics pertaining to and relations between the United States of America and German-speaking countries. The Foundation, like the Fox International Fellowship, believes that fostering cross-cultural understanding has become more important than ever during the modern era. Fox-Max Kade Fellows were typically involved in exchanges with the Freie University of Berlin.