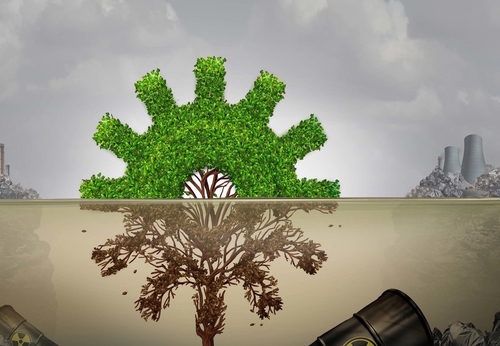 A diverse group of emerging scholars and practitioners from Ecuador, Mexico, Europe, Australia and the United States gathered to analyze “Unorthodox Solutions to Climate Change,” the theme of Young Scholars Conference, hosted by the Fox International Fellowship on April 5.

In her keynote address, Professor Guntra Aistara, an environmental anthropologist with the Central European University, explained how climate social movements emerge and how they can become effective and resilient. She pointed to an “interdependence between actors and at different scales,” describing how these relationships redefine and reshape concepts such as sovereignty, autonomy and justice. The combination of elements such as memories of place, networks of diversity, autonomies of practice, transformative values and nested justices encompass the struggle for what she calls organic sovereignties. In other words, organic farmers use their certified status as a space through which to negotiate networked and interstitial sovereignties, despite increasing contradictory pressures that constrain sovereignty across scales

Drawing from field research conducted in Latvia, Costa Rica and other countries, she explains the concept of new sovereignties and “networked places.” According to Aistara, “climate change is the lived experience of people” and the formulation of climate change policies must reflect proper understanding of how people are affected.  She cited the example of a community in Costa Rica where climate change degrades homes and livelihoods, yet residents deny its existence out of ignorance about the concept and terminologies. She compared this to another community with substantial NGO activities in the form of aid and development projects. The community members came to equate climate change with these programs and subsidies. She therefore concluded, “it is necessary to understand the embodied experiences of people” and tailor specific policy solutions.

Policies that contradict the people’s lived experiences and practices, or fail to support them, would constitute injustice. Such approaches, inconsistent with local ideas of justice, especially when it flows from top down, are unlikely to be accepted. She therefore introduced the idea of “nested justices” – policies that consider the nuances of the people’s experiences in their formation and application to the people.  Aistara concludes: “Unorthodox climate policies must emerge out of existing policies and practices; rather than trying to mandate, policies must emerge from networked diversities.”

In her response to the keynote address, Michaela Foster(link is external), 2017-18 Fox International Fellow and a PhD candidate at the Yale School of Forestry and Environmental Studies, emphasized the need to incorporate support mechanisms into policymaking. These policies must “recognize existing inequalities, without perpetuating them.”

In her comments, Atisha Kumar(link is external), 2009-10 Fox International Fellow and a political economist from Columbia University, focused on policy design and implementation. She highlighted the need to balance the differences among and within countries and the slow-changing nature of the institutions that support policies. She cautioned against the introduction of new injustices in the attempt to recognize nested injustices. Responding to Aistara’s concept of nested justices and the need to take the embodied experiences of the people into policy formulation, Kumar pointed out that policy formulation including embodied experiences of people can create political economy problems. While specificity may be necessary, communities construct broad policies by finding broad and common perspectives.

Leading the second group of discussions, Ben Cashore, professor of environmental governance and political science with the Yale School of Forestry and Environmental Studies, noted that there is a proliferation of policy tools and commitments. However, he noted that this has resulted in very little success due to the disconnect between the problem and the solutions being offered. In understanding prior climate change policy process, Cashore examines whether the problem conception might explains this disconnect: i.e. the emphasis on climate as largely a utility enhancing issue, rather than an environmental one caused by the pursuit of utility. He argued that policy advocates ought to be explicit about which of four problem conceptions motivates their proposals:

Type 1 win/win:  it is a utility problem where people harvest resources at a rate where the resources would eventually be exhausted. Known as the “tragedy of the commons”, the challenge is therefore to develop collectively optimal institutions that only allows people to harvest at the growth rate. This sustains yield and is a utility enhancing approach. This however does not apply to all problems but to the problem of resource depletion (tragedy of the commons).  This however creates “whack-a-mole effects,” where a solution to a problem creates additional problems.

Type 2, win/lose optimization: Type 2 draws on the same notion as type 1 but applies it to all problems in the form of cost-benefit optimization approaches. This applies the utility principle by asking whether the solution enhances overall social welfare (i.e. individual utility aggregated). While this framing has largely motivated most policy interventions to address climate change in the last 30 years, it has undermined environmental motivations in which human activity and utility enhancing bear responsibility, rather than solutions.

Type 3, win/lose compromise: Type 3 analysis also apply universal approach to all problems but unlike type 2, utility is combined with other values such as the environment, social concerns, culture, etc. The resulting method emphasize dispute resolution, stakeholder engagement and multi-goal policy analysis, comparing, contrasting and compromising. While useful in some contexts such as land use, they risk undermining action based on scientific evidence about the effects of C02 emissions in the name of “compromise” with other issue such as economic development. This orientation largely explains the United Nation’s approach to developing the Sustainable Development Goals.

Type 4, win/lose prioritization: this is when either the science or the norms tell you that in solving the problem, you cannot compromise it with others. Environmental tragedies, species extinction and climate change fall into this category, the science tells us that if we trade it off with other problems, then we won’t be able to solve it. This means that you need to prioritize the problem. The question therefore becomes ‘what kind of tools do we use to address type 4 problems?’

Cashore therefore proposes the path-dependency analysis where we project forward multiple steps. This recognizes that policy effect occurs through series of steps and critical junctures that can change normative preferences and behaviors. We must therefore focus on societal and policy triggers that have path dependent effects.