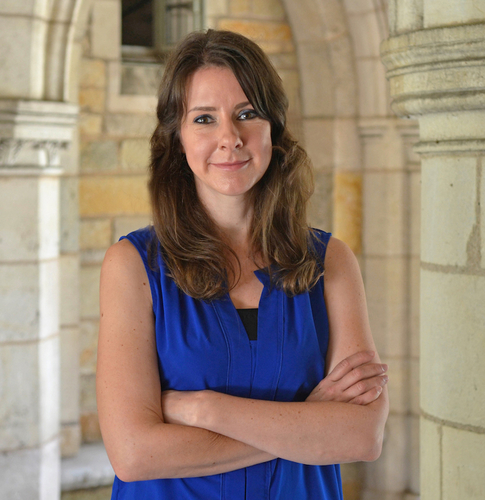 Emily Erikson, associate professor of sociology and the school of management (by courtesy), has been appointed by Ian Shapiro, Henry R. Luce Director of the Whitney and Betty MacMillan Center for International and Area Studies at Yale and Sterling Professor of Political Science, to serve as the Joseph C. Fox Director of the Fox International Fellowship beginning July 1, 2019.

“I am pleased to announce that Professor Erikson will be the next director of the Fox International Fellowship,” said Shapiro. “She will provide excellent academic leadership for the program, as well as high-level advisory support for the fellows, particularly those in residence at Yale each year, but also to those Yale students at Fox partner universities.”

“We are grateful to Professor Benjamin Cashore’s many important contributions to the Fox program over the past five years as its director,” Shapiro continued. “Under his leadership, the program has grown to include new partner universities in Australia, Singapore, Denmark, Canada, and Argentina. I know I speak for the fellows in expressing our gratitude and appreciation for Ben’s dedication and counsel to them.”

Professor Erikson’s research focuses on social networks, organizations, and the development of the institutions of capitalism and democracy. Her award-winning book, Between Monopoly and Free Trade: The English East India Company, shows how an informal social network linking autonomous employees fostered the Company’s long-term success, shedding light on the processes underpinning the emergence of early multi-national firms and the structure of early modern global trade. Her forthcoming book, New Knowledge: The Rise of Economics and Development of the Public Sphere, identifies the role of new organizational forms and state-merchant relations in stimulating the development of pre-classical economic thought in the seventeenth century. Her work has appeared in the American Journal of Sociology, Annual Review of Sociology, Sociology Theory, and Social Science History, among others. She serves on the council for the economic sociology section of the American Sociological Association and the executive council of the Society for the Advancement of Socio-Economics, sits on the editorial board for Social Science History, the editorial committee for the Relational Sociology Series (Palgrave MacMillan), and is a founding member of the advisory board for the Journal of Historical Network Research.

“I am honored to have been asked to take on the directorship of the Fox International Fellowship,” said Professor Erikson. “The fellows represent the next generation of leaders, and I’m looking forward to working with each of them. Through them we are building a community of engaged citizen scholars. Their research — and the intellectual network they create — has the potential to provide solutions for many of the problems that stand in the way of a peaceful, prosperous, and sustainable global future.”

The Fox International Fellowship is a graduate student exchange program between Yale University and 20 of the world’s leading universities in Africa, Asia, Australia, Europe, the Middle East, and the Americas. Its mission is to enhance mutual understanding between the peoples of the United States and other countries by promoting international scholarly exchanges and collaborations among the next generation of leaders. The Fox International Fellowship Program began in 1989 at Yale University and it currently has more than 600 alumni around the world.